An acquaintance’s startling claim made me dig a little deeper.

I was at the library with my youngest son when his preschool friend came in with his dad. The boys sat down to do some puzzles together, so David and I had a long and interesting chat. He and his wife both have jobs which can be (and have been) done from anywhere in the world, so I asked him what made them choose Middlebury, Vermont. “This is as close to living in southern Sweden as we could get and still be able to visit extended family with regularity.” Of course, I was very intrigued because if you know me, you know I love Scandinavia. A lot.

He and his wife had spent some time in southern Sweden and he made the parallel to Vermont (and Middlebury in particular) based on environmental consciousness, good preschool and public school experiences, pace of life and general social attitudes. He commented that he knew of plenty of former New York City dwellers who have given up the fast-paced life to settle in Vermont.

Taking a good long look at the “Vermont Creed” I referred to in my last post, I am assuming that he is mostly comparing native Swedes to Vermont flatlanders: those who have moved here “from away”. We tend to choose this place for the earthy lifestyle that was made famous by the previous generation of flatlanders. See, in the 1970s, Vermont’s personally independent, politically Republican, salty rough-hewn natives saw an influx of personally independent, politically Democratic, idealistic former-hippies who wanted to get “back to the land”. Vermont offered a good place to do that and those folks have altered the concept of what living in Vermont is all about.

Well-known Vermont businesses tend to come from flatlanders who come here to live a particular dream: Ben and Jerry were from Brooklyn, NY. Jake Burton (of Burton snowboards) was from New York and other parts of New England. Seventh Generation was founded by Jeff Hollander, from New York City. I can’t find a birthplace for Bob Stiller, the founder of Green Mountain Coffee, but before coffee, he lived here making cigarette-rolling papers. You get the idea. The notable exception to all that is Cabot cheese, which is still a cooperative of old-time dairy farmers.

So, what else compares? The weather? Almost. Actually, Gothenburg, Karlstad, Borås and Stockholm are all slightly warmer in the winter, much cooler in the summer, and get almost half the precipitation that Vermont receives. (Gee, Sweden is looking awfully good here….)

How about the cost of living? Surely Sweden is at a disadvantage, right? My research is not very scientific but it does show generalities. Unfortunately, one can’t compare Middlebury directly to Karlstad online. I went to expatistan.com and compared Gothenburg, Sweden, to Boston, Massachusetts, and Albany, New York. Then I went to bankrate.com and compared Burlington, Vermont, to Albany and Boston. Burlington falls right between the two… and so does Gothenburg: Boston is 8% more expensive than Gothenburg and Albany is 10% cheaper. Wow. (Is my passport up to date?)

As far as I can tell, David is right. 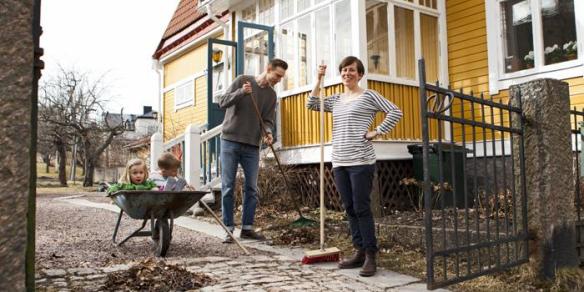 This picture, of one Arne Karlsson and family, was taken from a “move to Värmland” website, but I could swear I saw this family at church here in Vermont last week. In fact, that looks just a little like my house. And I do cart my kids around in an old wheelbarrow sometimes.

I’m more than a little bit torn. I’m now ready to move to Sweden- it sounds so great!!

1 thought on “Do I really live in the American Southern Sweden?”