It’s my name’s special day. Let’s get thirty Marens together and have a party!

Does your name have it’s own special day? If you’re lucky enough to have a Scandinavian name, it probably does. Wouldn’t you like to celebrate along with all the other Brynjulfs/Yngvilds/Dagnys you know? I sure would!

So, where does this tradition come from? How is it celebrated? And when is your name day?

The brief history goes like this: certain Catholic saints had dedicated feast days and these celebrations spread with varying application across Christian parts of the world hundreds of years ago. In Scandinavia, especially in Sweden, additional non-saint names were added in the 18th and 19th centuries and an official Swedish calendar was made for “namsdager” in 1901. Birthdays weren’t traditionally celebrated centuries ago, they being sort of a pagan thing and not always recorded anyway, just the christening date. I don’t know how it is done officially in other places, but there appears to be a list for name days in most Scandinavian countries, as well as some eastern European ones, Greece, and some Latin American countries. 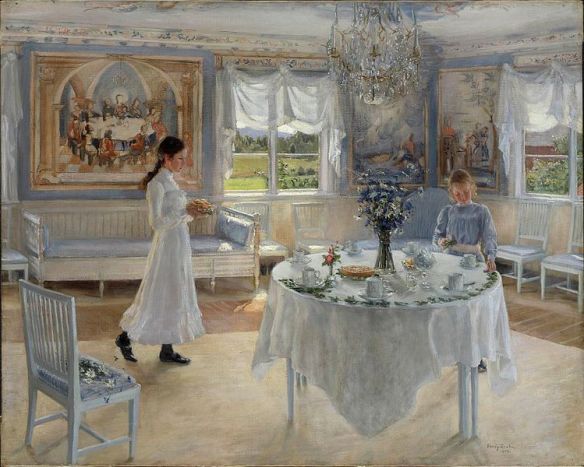 From what I can gather, a name day celebration might include a present but doesn’t have to. It usually involves a family gathering and good food (CAKE!). I’m going to assume that you can make this whatever kind of celebration you’d like since it’s your day. And I would give you extra bonus points if you celebrated with another person of the same name. Like a LOT of points.

This is the first year I have celebrated mine, and here’s the story. I’m auditing a Norwegian language class and, as part of that class, we need to attend some cultural events during the semester. Unfortunately, the semester ends before May, so we were looking for Scandinavian things to do and came up with a navnedag party (and mine just so happens to coincide nicely with the time to eat fastelavnsboller this year). We made fantastiske norske vafler (waffles) and fastelavnsboller and partied it up as much as one native Norwegian and five scandi-wannabes can at 9am on a college campus. It was fun!

My class, minus myself, plus two norsk food enthusiasts.

So, would you like to know when your name day is? If you can’t find it on one of these five links, I would suggest that you go ahead and pick a day and let it be known that you, Brenda/Enrico/Trishawnne, are going to celebrate your name.

Today. With cake. Or maybe waffles.

Have you ever celebrated your name? What did you do? 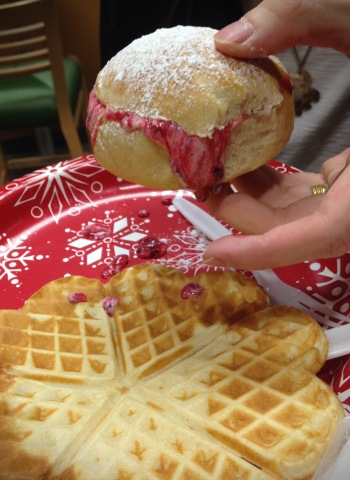