From Sandviken to Sandvika and back to Oslo. September 11, 2016.

I awoke before my alarm and the world was still dark. Strangely enough, the bath house was deserted early on a Sunday morning. I was fairly certain no one else had even brought a hairdryer or a dress to the campground, so I was happy to have the place to myself to get ready for the day. 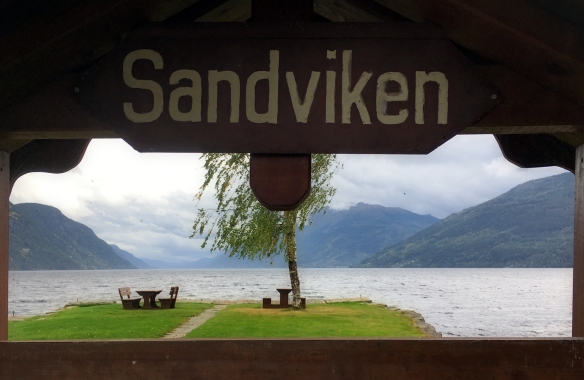 I cleaned my cabin, packed the car, and went over to the Sandviken Camping office to drop off my key. The sky was overcast, but the clouds had movement in them and I could see the light change as I stood there looking over Tinnsjøen. There was a lavender light that played among the upper clouds while the lower clouds remained a dusky blue, and sunrise made hesitant promises.

Dawn over Tinnsjøen from Sandviken

I would have liked to have stayed longer and watched the sun come up over the mountains, but there was just enough uncertainty about my return route that I felt I needed to get going. I bade the beautiful Tinn area goodbye, not knowing if I would see it again, but certain that it would always remain in my heart.

I turned right onto Fv 364 and headed up and up to the east of the Tinn sea. I took the road slowly, partly because the road was very wet, but mostly because I was drinking it all in. The playlist for this drive can be found on Spotify and it was the perfect accompaniment to the majesty around me. With every turn in the road I was overwhelmed by the beauty of the landscape and by my own emotions about Norway. This was an intense drive; I kept a tissue handy and stopped several times for photographs which mostly fail to show what I felt.

I was grateful that it was early enough on a weekend morning that there were no fancy sports cars riding my tail like there had been on Friday morning when I was taking the lake’s western road. I had 364 all to myself for a long time and it was magical. The storm that had come through the night before was gone but it left wisps of heaven in between the hills. As the sun began its slow diagonal ascent, the clouds rose with it, leaving glistening kisses on every leaf, every stone, each blade of grass and patch of moss.

Then, suddenly, there was sunshine everywhere and it seemed to have a voice of exultant glory, singing over lakes and forests and mountains. This place, combined with the changing light, moved me like few driving experiences have. Being alone made it possible for me to be fully sensitive to what was going on around me and I was absolutely filled with joy. There was no place in my soul for anything else; the joy was complete. For me, this is the essential experience of solo travel. There’s more than one way- and more than one place- one can find it, but the hope of this kind of feeling is what vacation holds out in its tempting hand. It’s why we take time off. For me it can often be found alone, but not always; sometimes it can be found with family, sometimes outside, sometimes in a city, sometimes in a religious setting, sometimes with just one other person. Everyone’s soul is opened and rejuvenated in a slightly different way, and each of us experiences joy differently at different times. But I think we all search for it. It’s a blessing when we find it.

The road took me through woods, past fields, around lakes, into valleys and over hills. I was almost dizzy with spirit and emotion by the time I stopped at Sønstenvatn to see the light sparkle off the glassy water and to watch the sunshine turn last night’s rain into steam on the birch tree trunks. The colors were extraordinary and had a physical influence on me. It took a few minutes to process it all. 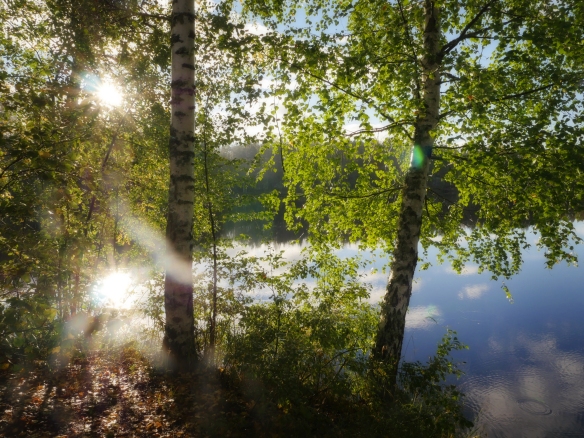 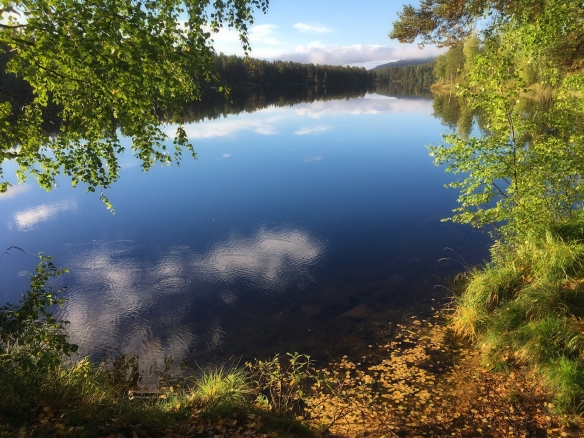 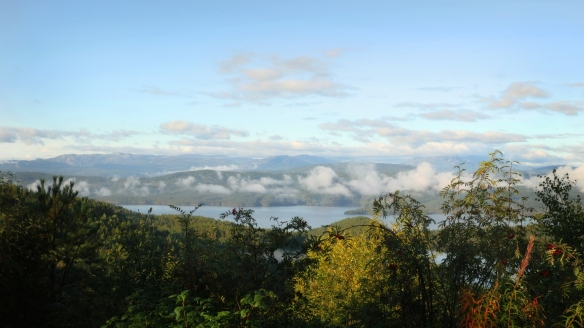 The whole morning was essentially an extended prayer of gratitude and song of praise for a Creator and God whose love and blessings shine on us with magnificent grace. There was no question in my mind that THIS Sabbath day was His, for sure. It had His beautiful signature all over it.

Turning east on 37, I made my way back toward the thickly settled towns of Buskerud and Akershus counties. I was early but that was better than being late. At about

10:30, I reached the town of Sandvika and turned my little car into the small parking lot at the Church of Jesus Christ of Latter-day Saints, or Jesu Kristi Kirke av Siste Dagers Hellige, as it is known in Norway. This chapel is home to the congregation to which I belonged when I was a visiting summer student in 1994. A good number of the same families remain and the familiar faces I saw were welcome sights. I enjoyed listening to the faith, testimonies and songs of these goodhearted Christians and worshiping God with them. Experiencing the church meetings in Norwegian put them in a slightly different perspective and brought back good memories of that time I was just beginning to make progress in the language. Being able to understand so much of it now felt like a great gift.

When the three hours of meetings were over, I felt like I had been spiritually filled twice over in one day. I had been invited to dinner with a family I knew and spent the rest of the afternoon with them and their extended family and friends as they celebrated their nine year old’s birthday. Here was another gift: a chance to be a part of a family gathering and eat a delicious homemade meal (and cake!) and talk with friends. It was like being given a temporary Norwegian replacement for what I was missing at home that day and their generosity was humbling, not least because I knew what it took to pull off a day like that. That they would be so kind as to include me was a testament to their beautiful unselfishness and pure charity. This is part of why so many Norwegians are so happy; they like to share.

I left as dusk began to take over. A small hotel room in the city awaited and so did one more day of Olso adventures before going home.