So, imagine you have a family of four adventurous kids and a rather ambitious husband. Suppose you really, really love winter- you know, just for this exercise if necessary. Envision the dark, cold, starry nights of December and the below-freezing temperatures and the way the wind can whip down a mountainside and right through every layer of wool, Polar fleece and Gore-Tex you have put on.

Now dream that you click your heavy, lead boot-shod feet into the tight bindings of some super-slick waxed and sharpened skis, then ride a hanging wind chime up, up, and up some more so that you now stand at the top of said dark and windy mountain with only a few cold

halogen flood lights to show you the way down. And then your precious baby five year old zips past you and says, “See you at the bottom, Mom!” and takes off like a bullet as fast and straight as his little body can go. There is but one word to describe the feeling as you chase after him, watching his narrow misses with various stationary and moving obstacles: Thrilling.

I think it was my own fault, actually. I asked for a Sundance season pass this year and my dear husband got passes for everyone. Mine is a mid-week pass, so I can go any time of day Monday through Friday. The youngest qualifies for a free anytime pass, and everyone else got a night pass which allows skiing from 4:30pm until they close at 9 on Mondays, Wednesdays, Fridays and Saturdays. With those restrictions, we decided to try to go every Monday and Friday night for the season, moving our Family Home Evening night to Sundays for a while. We had low expectations for the children’s endurance against the cold and fatigue. Not to mention that three of them never even advanced past the magic carpet and bunny hill last year in Vermont.

Day one: mid-December. We separated and my husband took the girls up the lift to the first stop. I trudged up the hill to the tow rope area with two little boys and their skis. The tow rope is actually much harder than the magic carpet. It really (literally) threw them off. So I pushed them halfway up the bunny hill one at a time and let them practice skiing down in a controlled manner before pushing the next one up the hill. Ugh. That got old fast- for all of us. They eventually got the hang of the tow rope (thank goodness) and were soon doing the up-down loop alone. Meanwhile, the girls were mastering the main green (easy) run.

Then we stopped for the pizza we brought. Oh yes, part of this adventure is bringing dinner with us, but more on that in a later post. It turns out only one of the boys is tall enough to make it onto the lift without serious help, so after dinner we divided up again: one parent, one older girl, and one little boy to each seat. Perfect. Getting off was easy and from that day on it was all, well… downhill.

Children learn this kind of skill much easier than adults do, as every Canadian and Scandinavian knows, so the kids were catching on fast. Surprisingly fast. Some of them are really fast. In fact, every drive home since that first day has included comments from my husband about how shocked he is that we are all doing so well, that none of us hold the group back, that the kids are so fast, so capable, so, so, and so on. It’s now a running joke. In fact he’s a little nervous about what it might require to provide a continuing trajectory of excitement over the next few years.

In order to keep ahead- or just keep up at this point- I try to go skiing in the morning when I can. It’s tricky with a 9 am class and a Kindergarten bus to meet at 12:20, but living 18 minutes from the lift is a bonus. I don’t go every week but when I do I try to go on some of the runs that are new to me or that are closed at night (i.e. not lit). It’s a total adrenaline rush to go on these new runs alone- who knows what will happen- but that feeling is part of the reason that one skis anyway. It’s not for the timid. 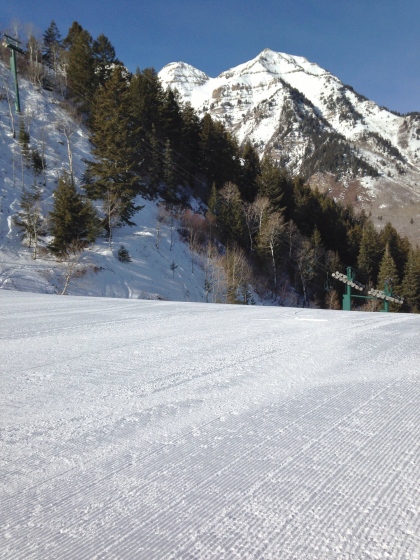